Last week, Eli Lilly (NYSE:LLY) spoiled some Thanksgiving appetites by announcing that its Alzheimer's disease candidate failed to benefit patients in a late-stage trial. Biogen (NASDAQ:BIIB) has a similar candidate in a huge late-stage study, but it doesn't expect results for a few more years.

Although Eli Lilly's stock understandably took the bigger hit, Biogen's shares dipped a few points on the news as well. Just how similar is Biogen's aducanumab to Lilly's solanezumab, and how important is the Alzheimer's program to Biogen's future? Read on to find out.

Perhaps the biggest difference is the two drugs' track records. Solanezumab's recent flop was the third time it missed the mark in big phase 3 trials, but Biogen's candidate is on its first attempt.

Combined with a functional difference, Lilly's failure doesn't tell us a great deal about aducanumab's chances of success. Solanezumab removes amyloid fragments that are floating solo, but it doesn't deal with bits that have already clumped together. Biogen's candidate binds to small bunches of the protein fragments before they can aggregate into dense plaques.

Results from a small study suggest that aducanumab's approach does the trick, with a slight hitch. During a smaller study, patients receiving 3 mg, 6 mg, and 10 mg of aducanumab showed highly significant amyloid plaque reductions that correlated with increasing dosages. However, the reductions didn't fully jibe with measures of cognitive decline from baseline observations. After 54 weeks, patients in the 3 mg and 10 mg groups showed a significant benefit, but test results for those receiving 6 mg fell short of the mark.

It's important to point out that the previous trial's placebo group contained just 10 patients, while investigators intend to enroll thousands into twin phase 3 studies. Given the dosage-dependent plaque reductions observed earlier, I'm inclined to believe larger numbers, plus a longer observation period, should iron out the wrinkle observed in the smaller trial.

We should know for sure in early 2020, when Biogen reports the changes in cognitive function observed after 78 weeks of treatment. In the meantime, Biogen investors will want to keep an eye open for a more in-depth presentation of the failed trial results Lilly intends to present at a scientific conference in December. Comparisons of observed plaque reduction in the experimental and placebo groups might offer some clues about aducanumab's future.

America spends hundreds of billions treating Alzheimer's disease, and a win in this field could more than double Biogen's top line. Before you get too excited, though, consider the 0% success rate of experimental drugs aimed at modifying Alzheimer's disease progression. Amyloid plaques are widely suspected to be the cause of cognitive decline in Alzheimer's patients, but there are additional molecules of interest. An increasing number of experts believe a combination approach might be necessary to treat the disease.

Even under the assumption that phase 3 aducanumab results will disappoint in 2020, Biogen stock looks like a buy right now. Revenue growth has been somewhat anemic lately, but the slowdown can be largely attributed to the altered trajectory of its best-selling product, Tecfidera. 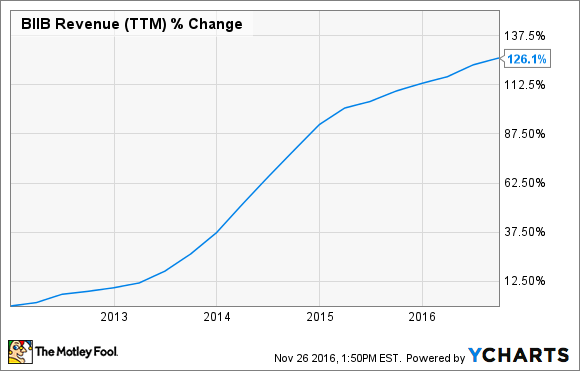 Following Tecfidera's launch in 2013, scores of multiple sclerosis patients switched from painful injections to the easily swallowed capsules. Improved compliance and a winning risk-to-benefit ratio sent sales of the drug rocketing. Unfortunately, its association with a handful of opportunistic brain infections knocked the drug off course.

While third-quarter Tecfidera sales grew 10% over the previous year period to an annualized run rate of about $4.14 billion, the company could use another rocket booster -- and it seems the market isn't expecting one to fire up soon. At recent prices, the stock is trading at just 17.2 times trailing earnings, which is far less expensive than the average stock in the broad-market S&P 500 benchmark.

In partnership with Ionis Pharmaceuticals, the underappreciated biotech has a first-in-class candidate for treatment of spinal muscular atrophy under review. If Spinraza earns widely expected approvals, annual sales of the drug could top out at around $2.5 billion.

Third-quarter sales of Biogen's hemophilia drugs, Eloctate and Alprolix, rose 46% and 30%, respectively, when compared with the same period last year. Early next year, Biogen also intends to spin off its rare-bleeding-disorder operations into a separately traded company to be named Bioverativ.

With a potential blockbuster warming up, an exciting spinoff coming up, and strong enough cash flows to support a juicy dividend if it wanted to, Biogen looks like a buy. A chance to end the Alzheimer's drought is just icing on the cake.